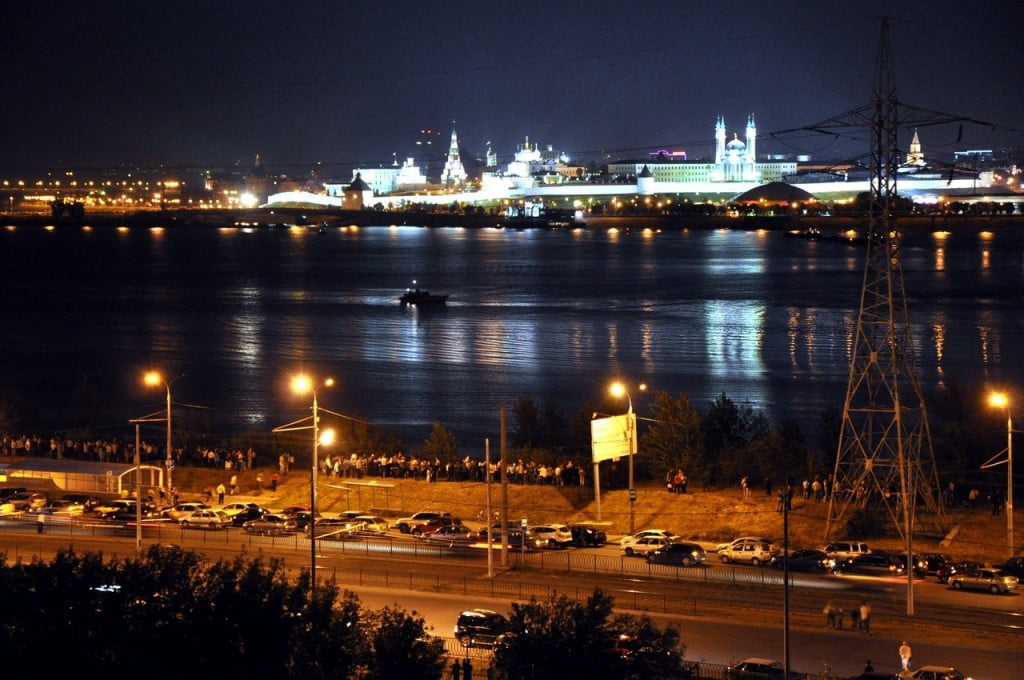 Kazan, in which history starting form long-long time ago there was a fusion of influences and mysteries of the East and the West civilizations, which is standing, like the Eternal City of Rome, on the seven hills, Kazan – is the capital of ancient civilization and country. The city – which is located almost in the very centre of modern Russia, laying only in 800 kilometers to the east from Moscow – is a capital of totally original nation and polyethnic republic between the Volga and the Urals.
This nation has its own language, culture, ancient
traditions and holidays, its own religion,
but its past and its present is sometimes mixed in a dramatic way with the history and the future life of Russia. This nation – is the Tatars of Kazan, this country – is the Republic of Tatarstan.

Each history is full of mirages, prejudices, wrongness, but few is the number of nations in the whole world, which suffered from so many historical misunderstandings and annalistic mirages as The Tatars did. The name “tata”, “tatar” came from far away China at dawn of Middle Ages, where this name was used to call one of the Mongol tribes. True or not, that these “tata” were in the frightening avant-garde of victorious Tumens of the great conqueror Chingiskhan, but – after the conquest of the Muslim world – all the conquered and merged into the land of the Golden Horde Turco tribes to the east of Rus, which after its defeat from the tribes of the Great Step also started to be called in the western chronicles “Tatariya” – all of them got the name “the Tatars”.
Nevertheless, the truth of history is that the nation, which is now called “the Tatars of Kazan”, used to live on its own land between the rivers Volga and Kama long before the invasion of Chingiskhan and this nation is not a stranger-nation. Russian chronographer N. Vorobiev wrote: “The name of Tatars (the official name of the inhabitants of the Golden Horde from the side of the Russians) in relation to the people of the Volga-Kama region starts to be used by the Russians only after the moment of erection of Kazan Khanate and after the brilliant victories of this Khanate over the Russians. The Tatars of Kazan protected all the real Tatars of the Golden Horde, and all the previous relations, which used to be set by the Russians in regards of the Golden Horde, were transmitted on Kazan Khanate and on its people. Living there Finnish tribes are still called not the Tatars, but the Bolgars. The Tatars never called themselves with this term, but on the contrary, the Tatars of Kazan considered it to sound as an offensive nickname”. The Tatars of Kazan always kept in mind and stored with particular care in their memory their genuine historical selfname – “Volzhski bulgari”.

We wonder, where the Bulgars on the Volga from? As early as 550 AD, the Gothic historian Jordan wrote about the Turkic tribes of Bulgarians, who lived in the North Black Sea. A strong state of Black Sea Bulgarians withstood the wars with Byzantium, but fell under pressure from the Khazars, and the descendants of those went on a journey across Europe, there have been tribal peoples of the Danube Bulgars, the Volga Bulgars, silver, and the Caucasian tribes Balkar, Karachay, and Kumyks. The founders of modern Bulgaria, today”s Tatarstan and neighboring Chuvashia were in V-VII centuries, the same people, and if the Danubian Bulgarians converted to Christianity, soon lost their Turkic identity, while retaining nonetheless the ancient name of their country, the Kazan Tatars, on the contrary, kept all except their name. Such are the paradoxes of history.
Many medieval historians knew about the state of Volga Silver Bulgars which was formed in VII-IX centuries. Even the great English historian and philosopher Roger Bacon, in his great edition, 0ri Ma ¬Pit ¬ num, written in the second half of XIII century, wrote: “Now, for Ethylene, Kuman principality bordered to the north, especially the Great Bulgaria, where were the Bulgars living between Constantinople, Hungary and Sklavoniey. After all, one that is located in Europe – Low Bulgaria, and there is talk in the language of the Bulgars, living in the Great Bulgaria, which is in Asia … “ 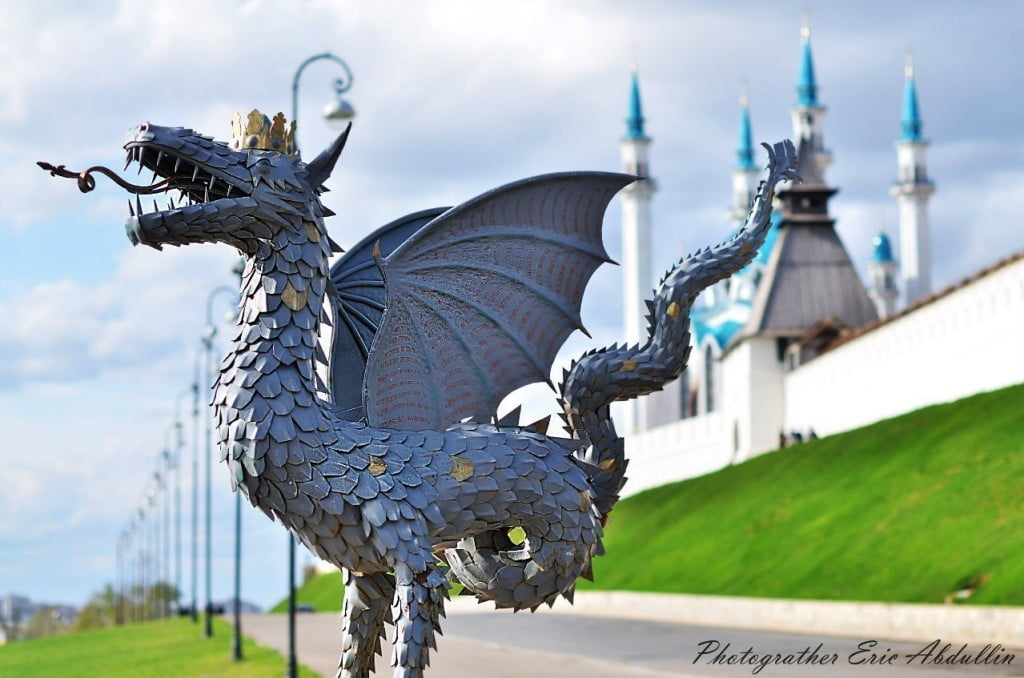 Great Bulgaria of early Middle Ages, the successors of which were in the history of the Khanate of Kazan and Tatarstan today, was a powerful and developed nation, trade with all the well known world: Bulgar leather and fur came not only to Eastern countries, but also to Lithuania, Poland, Italy , Flanders …
Talking about enlightened civilization of Volga Bulgars and calling them “trade and industry people”, a Russian historian Soloviev wrote: “Since olden times, when the Russian Slav still not started to build the Christian churches on the Oka River, were not taking more of these places for the sake of European citizenship Bulgarians have already listened to the Quran on the banks of the Volga and Kama …
Volga Bulgars since the tenth century minted their own coins with Arabic inscriptions, which clearly shows the level of trade, including foreign level of trade. The first European ancestors of the Kazan Tatars began to melt high-quality cast iron. In Bulgar cities in the area between the Volga and Kama developed metallurgy, pottery, jewelry, leather work. In Central Asia and Iran, the best leather and leather footwear called Bulgar since then.
Bulgar builders from the IX century erected stone and wooden mosques, schools, palaces, caravanserais civil buildings with central heating and water supply network. By the tenth century on the territory of Tatarstan appeared cities of renaissance type. The size of the area”s of the second largest city of Volga Bulgaria called Bilyar, reached 530 hectares. Kiev at that time held the 150, Vladimir – 160, Paris – 439 hectars … In 922, after direct diplomatic negotiations with Baghdad the Volga Bulgaria, converted to Islam, and existed among the people of Ancient Runes script replaced to Arabic script. Science, philosophy, literature was developing. The first major written work of Bulgar literature, was a great poem “Kyyssai-Yusuf written by Kul Gali, it is dated by 1212 year, and this masterpiece is written in a language very close to the modern literary language of the Kazan Tatars.
The astonishing thing – the magic of history! With the magic Kazan transformed from a small border town into a powerful Bulgar Khanate and the glorious citadel and famous for whole world trading capital on the Volga, its magic overthrew Kazan, turning her to denied captive, her charms heightened her again, but in a huge province of the capital … New steep turn of history and Kazan in 1922 became the capital of the autonomous republic and goes all the thorny path of the Soviet era. And now – the new status of Kazan – or a magical return to the ancient, sacred, beautiful and amazingly many-faced way?
Now is a new time, new holidays, and the most important holiday became the Republic Day, 30 August. That day in August 1990, Tatarstan, on behalf of all its peoples adopted the Declaration on national sovereignty, and Kazan became the capital of the sovereign of a presidential republic. 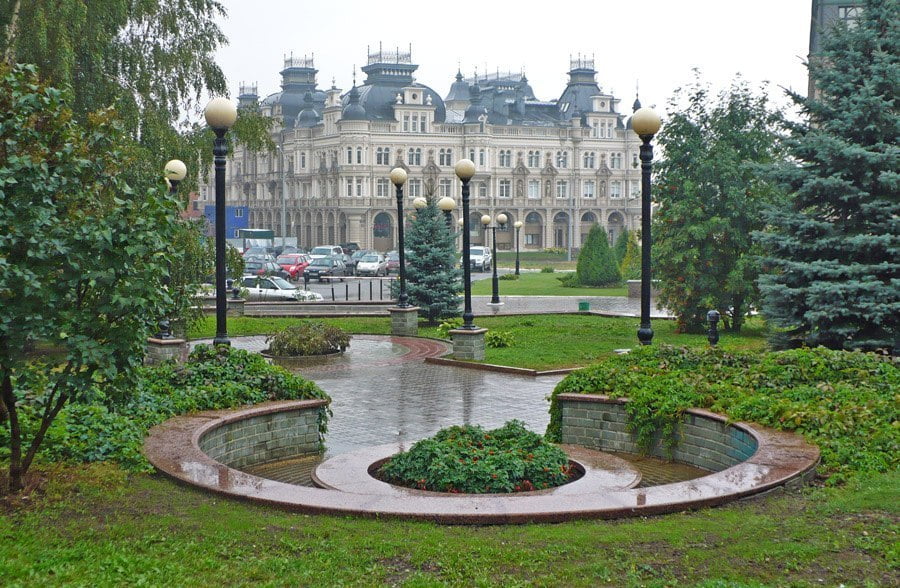 Kazan Kremlin – partly renovated medieval fortress, interior space, which has a regular planning and development of XVI – XXI centuries. The main architectural monuments of the Kremlin are, except for the fortress itself, the Annunciation Cathedral (XVI-XIX century), Tower Soyembike (first half of XVIII century), restored by the Church of St. Nicholas warlike (XVI-XIX century), the government offices (XVIII – XIX century), the Governor”s Palace (middle of the XIX century), Kul-Sharif (the end of XX – beginning of XXI century.), etc. ..
At the Kazan Kremlin was found that most archaeological layer, which revealed that at the end of X – the beginning of XI century. in this territory formed urban areas. As shown by archaeological excavations, in the tenth century. on the banks of the Volga and Kama appeared large trade and craft settlements, which are sometimes called. These were, first of all, fair place and locations which served merchants. Kazan was formed in a convenient geographical position.
Large-scale excavations in Kazan Kremlin, conducted in 1994-2000. in connection with the planned improvements of the territory of the Kremlin and the restoration of its historic monuments, have allowed to accumulate a large archaeological material and a more solid basis of the original sources to examine the early stages of the history of medieval Kazan. Well-established dating, sometimes unique items related to the period of the city.