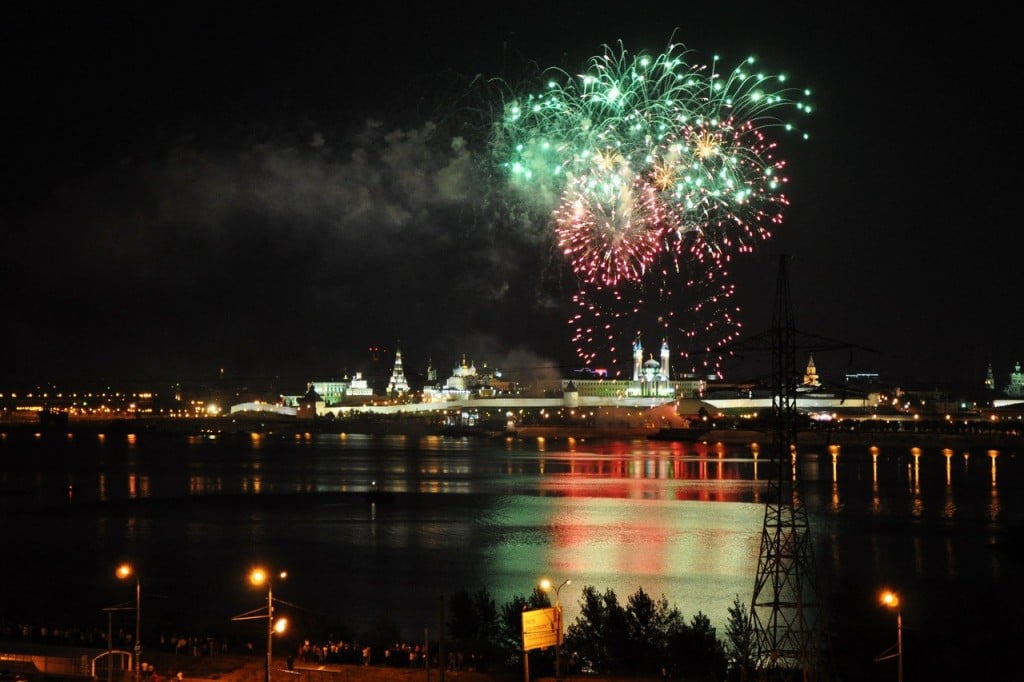 Mardzhani mosque – the first stone mosque, built in Kazan in 1767 by architect Kaftyreva in the Russian Baroque style.The permission for building gave the Empress Catherine II herself, thus violating the long ban Tatars erect stone buildings. Russian authorities in the city, concerned that the Tatars are building too high minaret in their view, the Queen said: “I identified them a place on earth and in heaven, they are free to rise at its discretion, because the sky is not included in my possession.”
The mosque is located at the intersection of K Nasyri and Z. Sultan streets. The mosque presents as two storey building with a “T” – shaped built on the north side. Entrance to the mosque is located on the south side of the right wing of built. Functionally, the mosque is divided into economic ground floor and second floor with the main chapels of enfilade rooms.
In the halls of the second floor the vaults are covered with lush stucco and gilt ornaments of vegetable nature, combining motifs of Baroque decor and Tatar decorative and applied arts.
Patterned stucco on the walls painted in blue, green and gold colors. On the right side of the wall separating the rooms, there is a door to the flush stairs leading to the minaret. The spiral staircase inside the minaret is leading on the top tier with access to the circular balcony for the muezzin.
Three-tier minaret almost has no decor and relate to the period of eclecticism. High-arched window openings are framed by a second messy baroque frames, corners and piers marked with paired and single pilasters, in the Ionic capitals of which are interwoven with stylized elements of Tatar decorative arts.
Marjani Mosque is one of the most interesting monuments of the Tatar religious architecture e of XVIII-XIX centuries. Since its creation, after more than 200-year hiatus revived monumental religious architecture and the traditional space-planning construct of the Tatars.
In the external and interior design of mosque was made new baroque motifs. Using modern for the time style characteristics in architecture mosque Mardzhani was put in a number of other prominent buildings of Kazan and the Russian architecture.
Blue Lake

An amazing place in the suburb of Kazan, which are very fond of traveling Kazans and guests. Bathing in the lake year round, mostly in winter and without any preparation. After bathing in the lake in winter, people involuntarily smiling all day, energizing the whole week, they held headaches and absolutely all of the disease. Many have simply can not do without swimming in the lake in winter. The water is considered to have miraculous powers. There was even talk that it contains of an active radon.
It is believed that the blue lake or lakes, because their unbroken chain – a miracle, that came to us from the Ice Age. They arose as a result of karst faults and in the basic have the ice that retains water temperature constant throughout the year – winter and summer, 4 degrees!
The depth of the lakes from 2 to 17 m or more, and the nature around is amazing. All together make up a single unique complex, which are a bit on the Earth. At the bottom of the lake there are rills. Due to the constant coming of spring water in the lake fantastically good visibility for the freshwater reservoir.
The slopes of the coast under water are covered with dense thickets of elodea, which inhabits a huge number of crustaceans, amphipods, and quite a lot of water donkeys and planarians.
Crystal clean water, can give you to enjoy panoramic views of underwater life of the lake: cascading down the terraces, ledges, fringed with green bushes Charales forming a sort of thick grass, below the soft limestone rock formed a fantastic slopes at the bottom of the funnel-shaped failures darken.
Thanks to a sufficient depth, easy slope to the water and the small size of the lake, as well as exceptional water clarity Blue Lake is also still one of the best places for the training dives in dry suits for divers.

Lake Kaban – symbol of Kazan, which is associated with numerous legends. Some legends tell us about the Tatar city of Kityazhe, sinking to the bottom of the lake after the capture of Russian cities. According to others – water witch is living in the lake, creeping on the little boy or girl every year. Proof of another legend from time to time residents of the city, caught from the lake some elements of numerous Khan treasures. Lake Kaban as a whole is a system of lakes connected with each other and having a total length of about 8 km, average width of 400 m and a depth of 10 m (max 22 m).
Lake Kaban – not just a big lake, but a water system, consisting of three large lakes, connecting them to the straits and channels Bulak. Ozernaya Valley stretches more than 10 km. And work together with the adjacent lowlands area of several hundred hectares. All this space is now found inside the city.
Water mirror of Middle Caban – 58 hectares, average – twice as many – 112 hectares, Upper – 25 hectares. In sum, it amounts to more than 200 hectares. Natural question arises: when and how the lakes are formed?
Qayyum Nasyri adduces in their writings ancient legend. Once, many years ago, the first people brought here by an old man by the name of Kasyym-Sheikh. All around were merely overgrown with reeds and sedge marshes, shrub and impassable uremia. And the people murmured against: “Why have you brought us where a lot of mosquitoes and no clean water?” And then the holy man spread out his beshmet, and prayed to Allah, took the edge of the coat and dragged him along. And there, where he pulled his beshmet, emerged the lake with the purest water. In this legend reflects people attitudes to the lake as a national shrine. But, I think, already ancient people understood that their origin of the lake obliged not to beshmet of Kasyym – Sheikh.
Even in his earliest writings about Kazan it was pointed out that the origin of the lake system is undoubtedly connected with the Volga. The lakes are located on the second terrace above the floodplain. The vast majority of scientists believe that the lake – the remnants of an ancient riverbed, the bayou of the Volga. This is evidenced by their elongated, slightly curved shape, and the bottom section, and other symptoms. As scientists say, The Volga flowed here 30 – 40 thousand years ago in a period of rapid melting of glaciers, then it was once more at 15-20 and brimming. Then the Volga “breakthrough” a new course and went a few miles west. From this it follows that the age of the lake system are estimated about 25-30 thousand years.
… Many centuries ago, when the word “Tatar” was not there, all the Tartars called Bulgars and lived in a nice neighborhood and the great city of Bulgar. But here came with a myriad army of bloodthirsty conqueror Timur Aksak (Iron chromium). He took the town by storm, residents interrupted, not sparing neither women nor the elderly or infants, and property looted. Not mant people could save themselves. Among them was the son of the last Bulgar Khan Abdullah named Kaban. Since he was lord, that is, Prince called him Kabanbek. When the conquerors first levied, and then stormed the city, Abdullah Khan, with all the children of the household, and locked himself in the big stone mosque Bulgar. After failed attempts to crack the powerful iron doors Aksak Timur ordered to impose mosque from all sides with logs and burn. When the logs flared and flames rose up to the sky on the roof of the mosque, amid the smoke and flames suddenly appeared youngest daughter of Abdullah Khan, the girl of unprecedented beauty, dressed in white garments.

The centre of the city- the Bauman street- is the main artery of the city, the most beautiful place, a proud of Kazan, where you can feel the variety of the city, admire the beauty of local girls, to drink a cup of coffee, and also to renew your clothes. You can also see many monuments of architecture, and all kinds unexpected sights.

The Temple of All Religions

We invite you to visit The Temple of All Religions, which combines various styles of buildings of different cultures and religions into one. The colorful temple is believed to be one of the most unusual landmarks of Russia. This is a centre of spirituality, a place where bodies and spirits could be cured.
The main idea of the Universal Temple is that all World religions are equal and they all lead to light and peace. This is the only place in the world where the Orthodox and Catholic churches, the Muslim mosque, the Jewish synagogue and the Buddhist temple harmoniously coexist as one building.
The temple brings together the iconic elements of 16 World religions, as well as symbols of extinct civilizations. You are invited to visit the rooms of Jesus Christ, Buddha, the Catholic Hall, the Egyptian Hall, the theatre hall and the picture gallery.

The Great Bolgar: get acquainted with the civilization of Volga Bolgars and, of course, enjoy its picturesque ruins and majestic ancient buildings, which attract people from all over the world. Located just 200 kilometres south of Kazan, it’s an official UNESCO World Heritage Site. This place is all that remains of the Golden Horde, the once great and powerful country in Eastern Europe.
Be sure to visit the magnificent White Mosque – a copy of snow-white Grand Mosque of Sheikh Zayed in Abu Dhabi , the Museum of Bolgar Civilization ,the Cathedral Mosque, the Black Chamber, and the East Mausoleum, the 700-year-old burial chamber for Bolgar nobility and Khan’s Tomb. Also be sure to check out the largest printed Koran in the world, listed in the Guinness Book of Records.