Theatre of Opera and Ballet named after M. Jalil 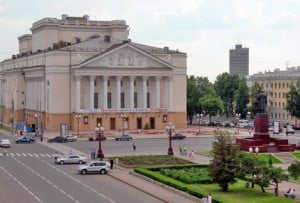 Tatar State Academic Theatre of Opera and Ballet named after M.Jalil – the leading theater of Kazan. The basis of the repertoire consists of opera and ballet performances, as the world-famous performances and works of Tatar composers. Twice a year, in the repertory there are new productions – one opera and one ballet. By New Year’s vacation there is a festive setting for children.
Twice a year, there are the international festivals – named after Chaliapin and Nureyev. First, an opera, usually takes place in February and March, the second devoted to ballet – in May.
The theater opened in 1956. The facades and interiors are designed in the style of his neo-classical and modern combine classic shapes with the Tatar national ornaments and items of decorative art. In 2005, the theater moved the capital reconstruction. Technical equipment, which was the result of the reconstruction,  allows to create performances with a complex set design, lighting effects.
Hall has 955 seats. 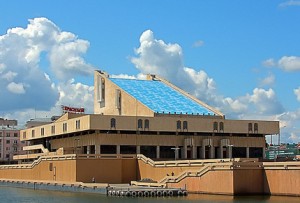 The official name of the theater – Tatar Academic Theatre named after Galiaskar Kamala. His repertoire consists mainly of performances based on plays written by tatar playwrights. They are slightly dilutedby productions of classics of world drama. The performances  are on the Tatar language, but everyone is provided with simultaneous interpretation.
The date of the theater is December 22, 1906, when in Kazan was played first public performance on the Tatar language. Theater named in honor of the “Tatar Ostrowski” – Galiaskar Kamal. His first drama “Poor boy” was written in 1898, published in 1899. Before the revolution, he wrote such works as “first performance”, “For the present,” “Secrets of the city”, “Bankrupt”. Translated into Tatar play “pathetic child” Namik Kemal, “Marriage,” “The Government Inspector” by Nikolai Gogol, “The Storm” by Alexander Ostrovsky, “The Lower Depths,” Maxim Gorky and other plays of Russian and foreign authors .
Hall has 840 seats. 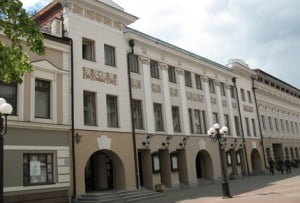 One of the oldest theaters in Russia, Kazan Academic Russian Drama Theatre named afterV.I.Kachalov dates back to 1791, when by the initiative of Governor Prince S.M.Barataeva in Kazan there was public theater, which gave regular performances for the citizens in a specially rented for this purpose room on the main street of the city. For 210 years, the theater has seen on its stage outstanding actors, directors, theatrical figures of Russia XIX-XX centuries. Now the theater’s repertoire consists of the best works of Russian, world classics and contemporary drama and follows the traditions of Russian psychological theater.
Theatre named after the famous Russian actor late XIX – early XX century, Vasiliy Katchalov, who played in Kazan theater in his early career.
Hall has 505 seats. 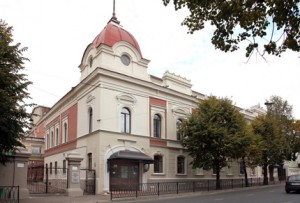 The repertoire from the founding to the present day are the performances of plays by tatar playwrights on the Tatar language. Performances are accompanied by a translation – everyone has headphones.
First performance was made in November 6, 1933 in the Shali village (play K.Tinchurina and K.Nadzhmi “Bulat grandfather family”).
From that day began a long way from the state farms theater  to the national mobile and, finally, the Tatar State Theatre of Drama and Comedy named after Tinchurin.
After 55 years of wandering in 1988, the theater becomes stationary and settles in a historic building on Gorky Street, 13.
Hall has 400 seats. 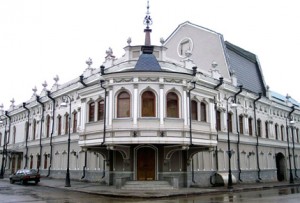 The Kazan State Theater of Young Spectators basically plays the classics of Russian and foreign literature. Performances for adults start at 18:30. At 11:00 and 13:00 in the theater there are children’s plays.
The theater opened on November 30, 1932 with premiere  “Contemporary”. Even to this day the building, where the Theatre for Young  Spectators was, was more than 100 years. An elegant building, decorated with stucco and balcony,  served the theater for 64 years, until the fire has not destroyed the stage and auditorium. The next six years, Theatre for Young Spectators wandered through strange scenes, went on tour, while the building was renovated. In 2002 actors came back on the home stage.
Hall has 273 seats. 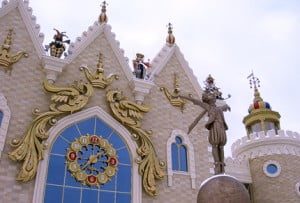 March 1, 2012 it was opening of the new building of the children’s puppet theater “Ekiyat.” The theater was founded in 1934 and until recently was based in a former church. The new building was built specifically for the puppet theater in a fairytale castle with multi-colored towers, sculptures of fairy tale characters and big clock over the main entrance.
“Ekiyat” – the only puppet theater in Kazan. The repertoire of more than 30 productions based on fairy tales of the peoples of the world, plays on the historical and contemporary themes. In productions use a variety of dolls – from classic to contemporary to modern style.
The new theater has two halls: small (100 seats), a wholly surrendered to the needs of the Tatar troupes, and large (256 seats), where there are Russian plays. 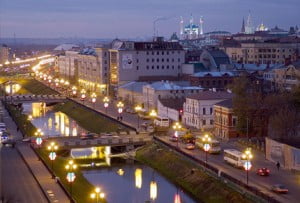 Small theater, located on one of the main streets, it is not so easy to find. Log can be found in the courtyard of the  Soviet-built building.
It plays contemporary plays,there are young directors and actors of college age. Their creative experiments are not always successful, but always contagious – they carry the energy of conviction in his creative right, the search for new forms of  expression.
Artistic director – Eugene Aladinsky known in theatrical circles as a master of unconventional drama techniques.
Hall has 150 seats.